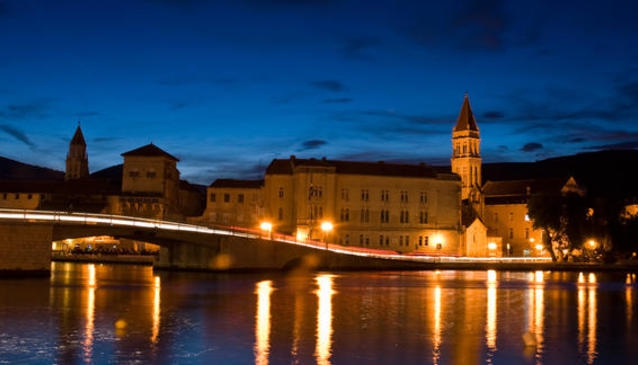 Trogir is located 20km west of Split and 30 km east of Primosten. Nestled between the mainland and the larger island of Ciovo lies this fascinating city. Trogir, the crowning jewel of Croatia, as some call it, is home to numerous churches, palaces, belfries and cobble stone alleys.

Visiting Trogir is like taking a step back in time when the Romans inhabited this partial island and vaulted streets, Romanesque and Gothic houses dotted the cityscape and church was the general meeting place.

Some of the more significant sights in Trogir include the Cathedral of Sv.Lovro, Trg Ivana Pavla II, Ramparts Walls, Convent of St.Nicholas, the Town Gate, Kamerlengo Fortress, St.Mark's Tower and Marmont's Gloriette.

The Church of Sv.Lovro/St. Lawrence is possibly one of the most significant architectural buildings in all of Croatia. This Romanesque styled church was built in the 13th century following a three nave basilica plan, one of the best examples of medieval architecture.

The Cathedral is open everyday from Monday to Saturday from 9-19 and admission is 20 HRK.