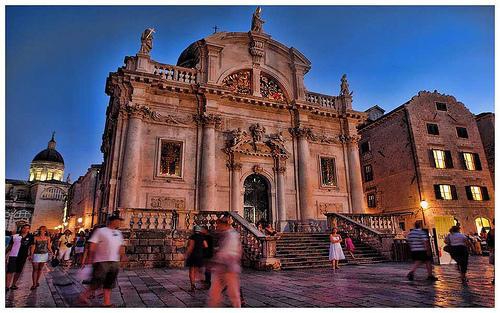 The Old City of Dubrovnik encompasses magnificent castles, walls, churches, monasteries and fountains which were all recognized by UNESCO, in 1979, as one of the 7 world heritage sites in Croatia.

The beauty of the city is enchanting, mysterious and breathtaking all at the same time. The city has had a tumultuous past including a large earthquake which damaged a great deal of the city in 1967 and more recently, damages which occurred during the Balkan War in the 1990's. However the reconstruction and restoration of the original architecture have come a long way and along with funding from UNESCO, Dubrovnik has been almost completely restored to its original state.

The old city walls which were built in the late medieval times once protected the village from enemies. Today these very walls are the crowning jewel of Croatia and popularly referred to as the pearl of the Adriatic.

Baroque, Gothic and Renaissance architecture merge together to create the masterpieces of Dubrovnik.

The whole city is a MUST-SEE, however if we were to highlight on a few of the main attractions they would be the following.

The City Walls - The walls wrap around the entire old city of Dubrovnik. A 2km walk is worth the treck as along the way you will not only have exceptional views of the old red roofed houses, the sprakling Adriatic but you will also stumble upon 15th and 16th century forts and fortresses and towers including, St.John's Fortress, Minceta Tower, Revelin Fort, Bokar Fortress and Lovrijenac Fortress.

Tourist Information, Walking Tours and Admission Information can all be found at the Dubrovnik Tourist Board Office which is open from 8-16, Monday to Friday, 9-13 on Saturday and closed on Sunday.