Ston offers... arguably the best oysters and mussels in the world.

Ston is a romantic town located in the Dubrovnik Neretva County. Set off the beaten track, this coastal destination features traditional Croatian hospitality, ancient architectural masterpieces along with arguably the best oysters and mussels in the world. The rich soil of the region also provides ideal conditions for vineyards and olive orchards. This fascinating destination presents tourists an idyllic oasis of tranquility in the busy summer months. Here is our list of must do, must eat and must see things while visiting Ston:

The Walls of Ston - Resembling the Great Wall of China or the old city walls of Dubrovnik, the walls of Ston were once used as a defense system to protect the Peljesac Peninsula. The walls cover a surface of almost 6 kilometers circling the village below. It is fascinating to think how these walls were constructed in the 14th Century when cranes or modern construction equipment were unheard of. The walls connect Ston and Mali Ston in an unusual 5 pointed shape, today encompassing 20 towers and five forts, with the main fort of Ston being Veliki Kastio.

The Walls of Mali Ston -  Mali Ston is a 15 minute walk from Ston. Mali, meaning small, represents the mirrored version of its neighboring village Ston. The great walls which connect the two are fascinating and provide beautiful lookout points. The main fortress of Mali Ston was Koruna. Today, the Fortress of Koruna is one of the most stunning, statuesque places along the walls to visit, proudly towering over the town below. A major earthquake occured in 1996 which caused a lot of destruction and damage to the orginal architecture of numerous buildings in the area. Various restoration and reconstruction projects have been undertaken, nearly bringing Ston and Mali Ston back to their original state. Local's Tip – We highly recommend exploring the walls and enjoying the fabulous panoramic views. The hike is quite steep, though, so make sure you are in appropriate apparel and bring water with you as there are no refreshment stands along the way. Also, if you are up for a challenge take part in the Ston Wall Marathon, which usually takes place at the end of the summer. 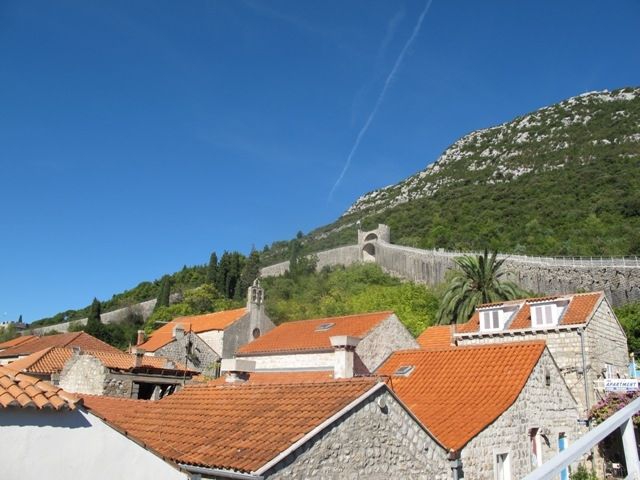 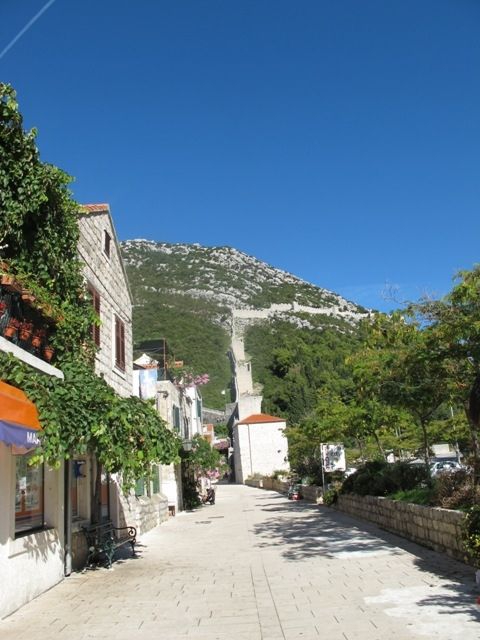 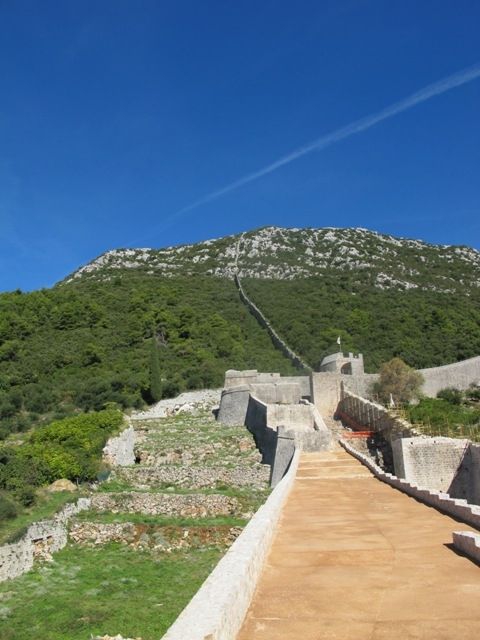 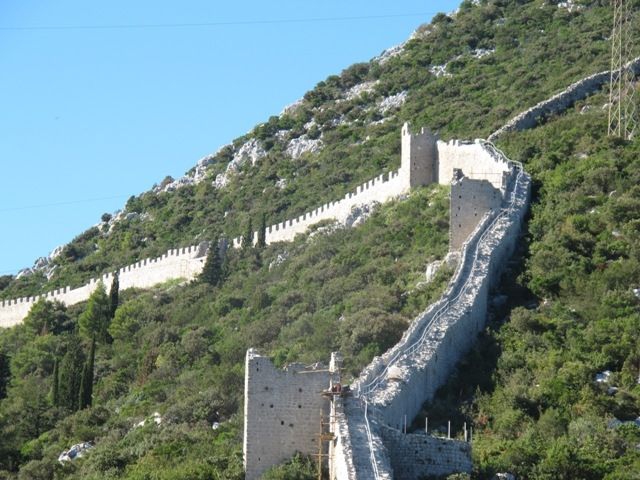 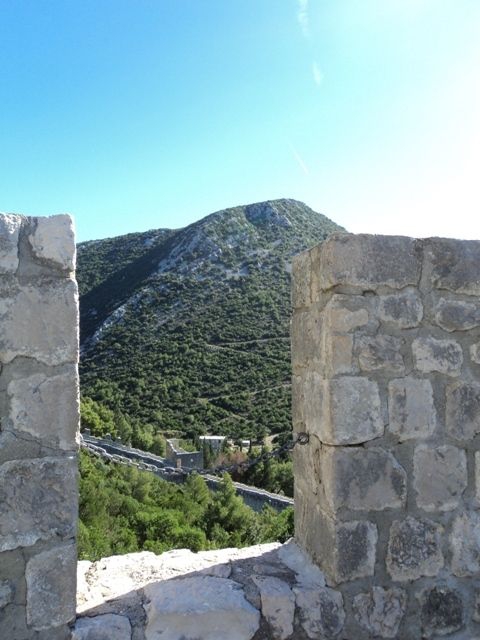 The Oyster Farms - The oyster farms of this region can be seen in the beautiful sea below as you drive along the winding roads of Peljesac. Little black dots adorn the surface of the peaceful waters where numerous oyster seeds cement themselves on the vertical hanging ropes below. The picturesque wooden boats drifting around the farms collect the mature oysters, which are then sold to the market. This method of cultivation is exclusive to this region. This form or oyster cultivation has been present since the 17th century. In the 1980s a record-breaking 2 million oysters were produced in these very farms. The war of independance caused major destruction of this area and all production was brought to an abrupt halt. Since the independance of Croatia, Ston and Mali Ston have built up the oyster production industry once again and a roughly 500,000 oysters are produced in this region yearly.

Local's Tip – If you have never tried oysters raw there is no better place to give it a go than in Ston. The freshness and quality of the oysters are garuanteed. Simply drizzle the oyster with a little fresh lemon and you are ready to slurp it back. The taste is unusual and fabulous at the same time.

The Vineyards of Peljesac - The ancient Greeks and Romans once prepared the land of the idyllic Peljesac region for the prosperous vineyards which today produce some of the most renowned wines of Croatia. The rocky terrain and the favorouble climate merge together creating ideal conditions for many hectares of vineyards. Tucked behind the rolling hills of this peninsula, mixed together with olive trees and thick Mediterranean vegetation, the vineyards of Peljesac are quite a sight to see. Driving along the main road between Ston and Orebic, you will come across the vineyards of Vukas, Milos, Grgic, Matusko, Bartulovic and numerous others. In the small village of Kuna lies the fairly new Terra Rota winery which is the highest vineyard on Peljesac at 1,575 feet above sea level, stretching across 30 hectares of land. Some of the most popular wines are the red and white Dingac, the red Postup and Plavac Mali (also red). Rose wine can only be found at the Bartulovic winery as they are the only producers of this sort. We must mention that famous Napa Valley wine producer, Mike Grgich, is originally from this region. He has insisted for years that Zinfandel originally came from Peljesac and recent research and DNA testing have proved this to be true.

Prapratno Beach - Just when you thought Ston could not get any better with its historical architecture, delicous specialty oyster dishes and fabulous wines, you come across the hidden sandy beach of Prapratno. Located in a secluded bay six kilometers from the city of Ston lies the stunning Prapratno Beach. Its shallow waters and sandy shores make it the ideal beach for families. A large parking area, a nearby camp and numerous cafes and small restaurants operate all summer long.

Local's Tip – Take a hike along the shoreline and you will find some hidden rocky beaches which are more private and just as beautiful with shade from the numerous pine trees embracing the sea. 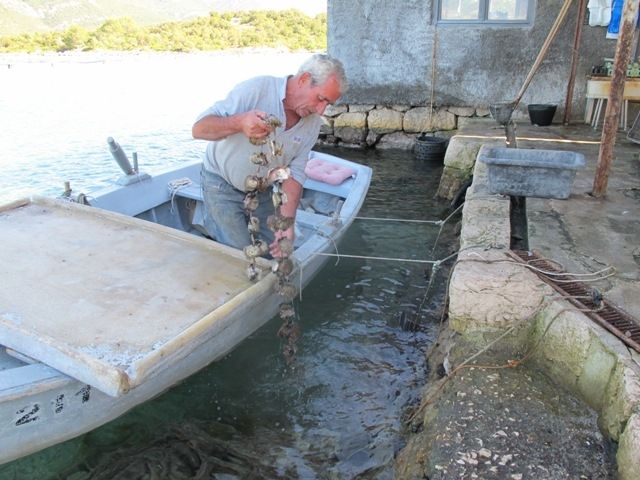 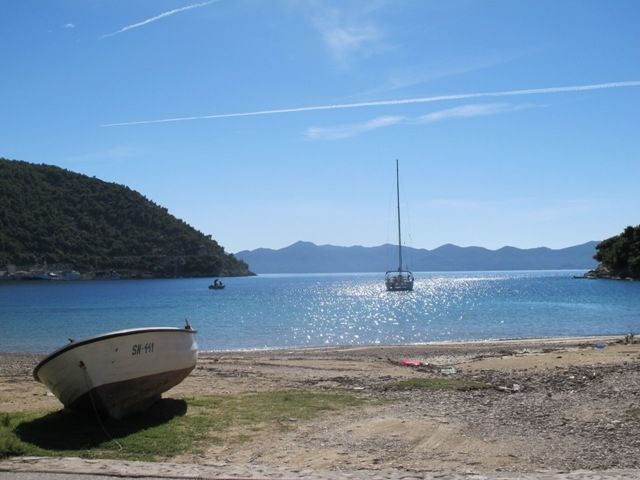 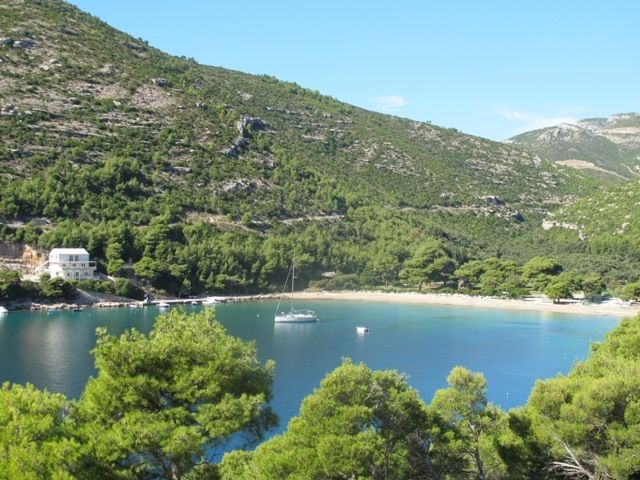 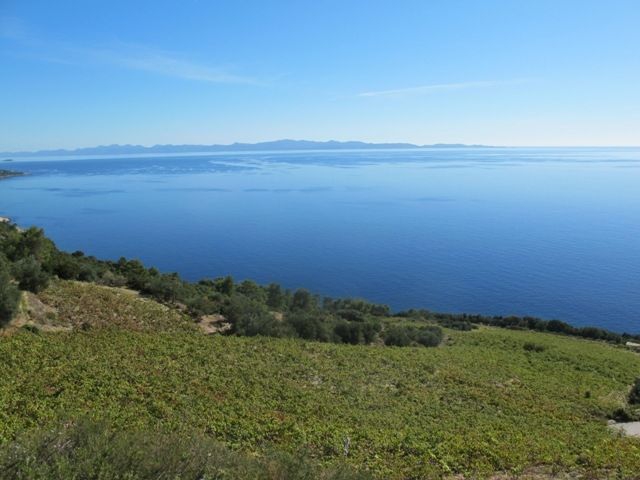 Old City Centre of Ston - The monumental city walls protect beautiful Ston and embrace the old city centre of the town. Small and idyllic, the main city square provides the perfect place to enjoy a fabulous, well-deserved lunch after a hike of the walls, a tranquil morning coffee or a hunt through the picturesque labarinth for an authentic souvenir. Four blocks of stone houses provide a symetrical urban plan which was, and still is, rare for Croatia and this part of Europe. Within the city centre, the Sorkocevic Palace (1573), the Franciscan Monastery (1349), and the Public Fountain (1581) are just a few of the stunning Renaissance architectural masterpieces you can visit.

Local's Tip – If visiting Ston in the month of September be sure to check out the KinoOkus Event; a unique and fascinating gastro film festival.

Mali Ston Harbour - This 15th century port is now home to some of the country's best restaurants serving local oysters, mussels and wines. During busy times of the year it is nearly impossible to find a free table for lunch. However, this significant port was not always a meeting place for social outings: it once was a very important factor in the intricate defensive system for Ston and Mali Ston as it marked the outermost bastion of the great protecting walls. The port was completed in 1490 with three aresenals, a round tower and a stone-inscribed portrait of a tribute to St.Blaise in the walls.

Local’s Tip – The harbour is fairly shallow and is thus ideal for the oyster farming boats however it is not deep enough for the docking of yachts. Secondly, after numerous mentions of the infamous oysters of Ston it may be redundant to say but we highly recommend trying these shellfish specialties in one of the spectacular restaurants in the harbour of Mali Ston. 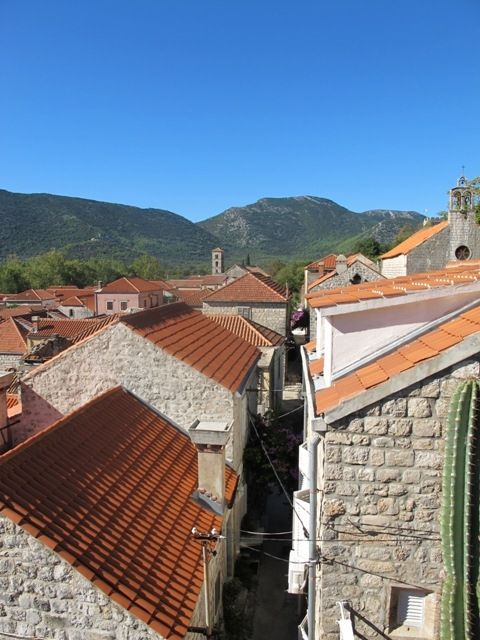 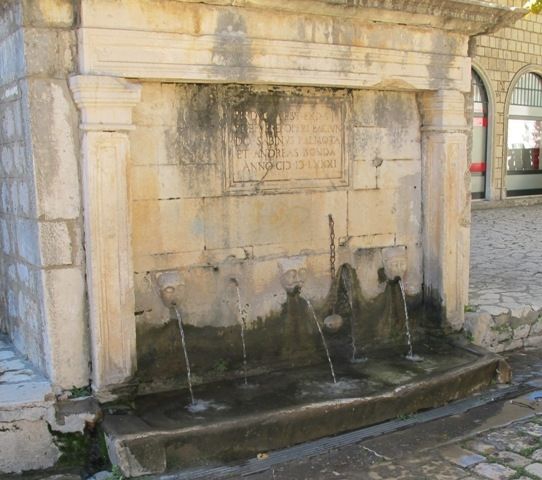 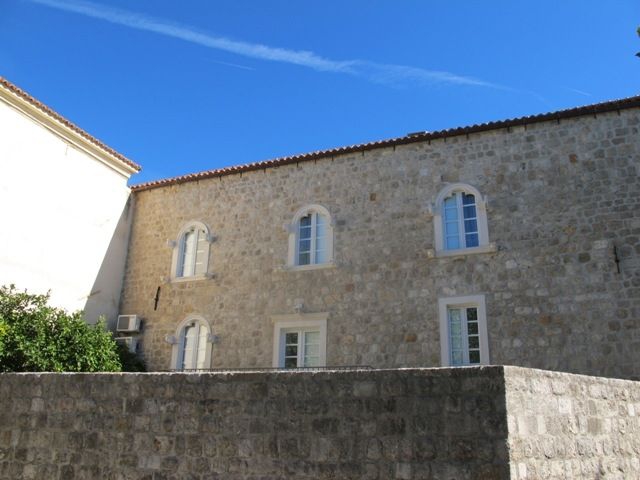 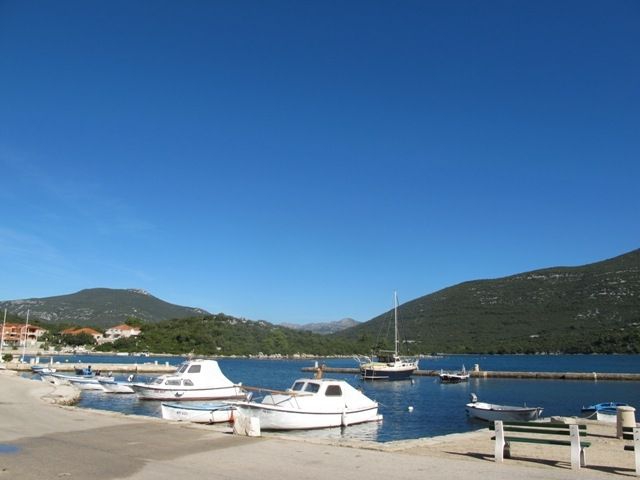 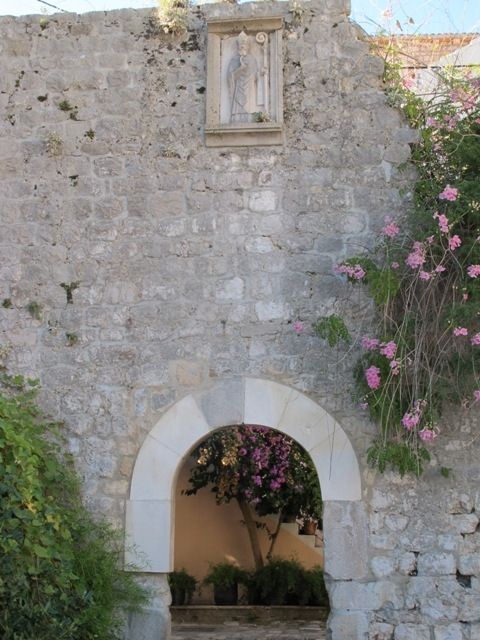 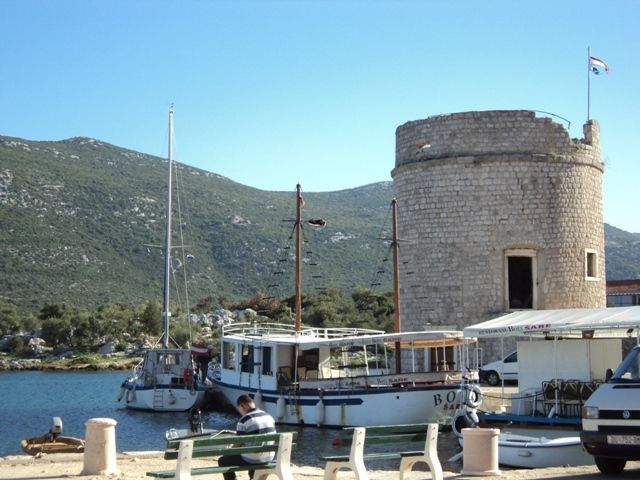 The Salt Mines of Ston - The salt pans of Ston have played an important role in the history of this region and still play a significant economical role for the people of Ston today. At one time, the walls of Ston protected this natural resource and allowed for the safe harvesting of the most important and the most profitable export of the Dubrovnik region. The salt pans span across 4,500 square meters, including the salt fields, the pans themselves and the production warehouses. Dating back to the 13th Century, these are the oldest salt pans in Europe and possibly even in the world. It is believed that these very same salt pans were used in prehistoric times due to relevant artifacts found here. Every year, volunteers and experienced workers alike come together between the months of July to September to collect salt. Accommodation and food are provided in return for labour. Anywhere from 30 to 100 tons of salt are collected during this time period from each of the nine pools. The salt mines of Ston are a fascinating and beautiful site to see.

Local's Tip – We highly recommend visiting the salt mines. Admission is 10HRK and the most fascianting part is that the salt is still collected in the same manner as it was in the 13th century.